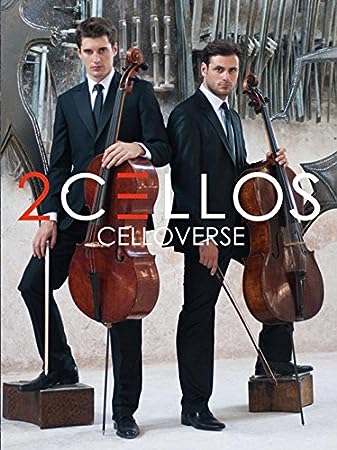 2CELLOS, music’s most electric and dynamic instrumental duo, return with their new album Celloverse (Portrait/Sony Music Masterworks) on January 27, 2015.  Available now for preorder, Celloverse is supported by a world tour kicking off in Australia and landing stateside Feb. 19 with a sold out concert in Minneapolis (U.S. tour schedule below). 2CELLOS latest music video from Celloverse, “Shape of My Heart,” is their take on Sting’s beautiful song – check it out here.

Propelled into international fame in 2011 after their version of Michael Jackson’s “Smooth Criminal” went viral with 20 million-plus YouTube views, Croatian cellists Luka Sulic and Stjepan Hauser return to their rock roots on their third album, Celloverse.

Self-produced by Sulic and Hauser, Celloverse showcases 2CELLOS’ unique ability to reinvent current and classic rock/pop songs, starting with “The Trooper Overture,” a metal-meets-classical mash up of Iron Maiden’s hit and Rossini’s “William Tell Overture.” The album includes their take on AC/DC’s “Thunderstruck” (the video has 30 million views), “I Will Wait” by Mumford & Sons and Michael Jackson’s “They Don’t Care About Us.” Rounding out Celloverse is the Paul McCartney classic “Live and Let Die,” with special guest Lang Lang and the title track, an original song penned and arranged by 2CELLOS.

“In terms of arrangements and production, as well as playing and sound, this is our most advanced album,” says Sulic, “and we’re so excited to share it with our fans around the world!”

A visually dynamic act, 2CELLOS will create a music video for every song on the album.  The deluxe edition of Celloverse features seven of their most popular videos including two live performances from sold out arena shows in their native Croatia.

2CELLOS playing style has broken down the boundaries between different genres of music, from classical and film music to pop and rock. They have no limits when it comes to performing live and are equally as impressive when playing Bach and Vivaldi as they are when rocking out.

They have sold out shows around the globe and also performed with Sir Elton John as part of his band, as well as opening his shows to rapturous acclaim.

2CELLOS are the first instrumentalists to be featured on Glee.  They have also appeared on The Ellen DeGeneres Show, The Tonight Show, and The Bachelor Live Wedding Special.  Their self-titled debut album and IN2ITION are available on Sony Music Masterworks.

Ahead of 2Cellos Australian Tour - Exclusive Interview with Luka Sulic

Shape of My Heart - A New Viral of 2Cellos

Is Amazon has been sale it? Love to buy.

You can see that here: http://amzn.to/1tNKsSc

Ahead of 2Cellos Australian Tour - Exclusive Interview with Luka Sulic

One half of super-duo 2Cellos reveals the story behind the rise and rise of the rock star cellists. From little...
Copyright 2CELLOS Fan Club, All Rights Reserved
Back to top